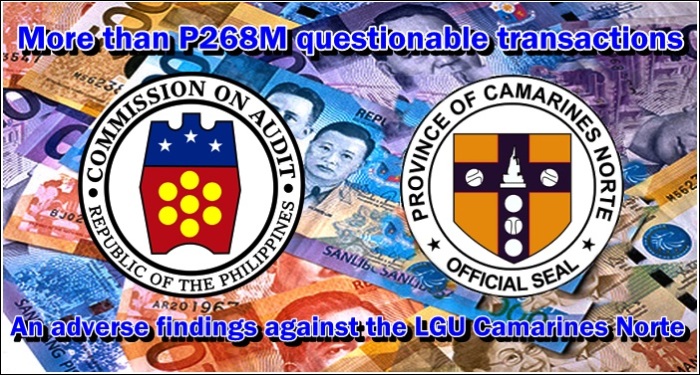 “The notice of suspension and dis allowance is issued on expenditures that are considered “doubtful legality, validity or propriety; illegal, irregular, unnecessary, excessive, extravagant or unconscionable”.

In a released executive summary of its annual audit report for the year 2016, the Commission on Audit (COA) said it had issued notice of disallowances (ND), charge (NC), and suspension (NS) to cover these transactions.

The combined total in 2015 of the notice of suspension, disallowance and charge of the disbursements and expenditures of the Provincial Government of Camarines Norte is only amounting to P22,720,555.63 million.

According to the COA report, the notice of suspension of the disbursements and expenditures amounting to P268, 817, 176.60 million has been issued by COA to the Provincial Government of Camarines Norte.

The COA report said that as of the writing of their audit report, the LGU Camarines Norte has submitted additional documents as compliance with the requirements indicated in the notices of suspension.

A notice of suspension is issued when transactions are of “doubtful legality, validity or propriety.”

Notice of disallowance is issued on expenditures that are considered “illegal, irregular, unnecessary, excessive, extravagant or unconscionable.”

A notice of charge is issued when government assets that are disposed of have been under-appraised or under-assessed, or when revenue and regulatory agencies under-collect.

Under COA rules, government officials and employees who are subjects of notices of disallowance and notices of charge are liable to return the amount involved. These notices become final if no appeal is filed against them within 6 months from the date of receipt. – The Fenix Files/rif